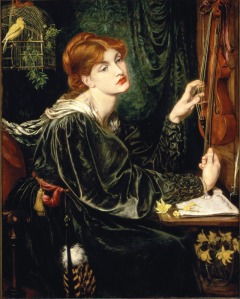 Video of Feb. 5, 2021 talk given for the De Morgan Collection (London)

“This deeply exciting collection of essays settles the question whether Pre-Raphaelite poetics is a meaningful category by unsettling so many prior assumptions about Pre-Raphaelitism. The contributors forcefully demonstrate that poiesis was a central medium of Pre-Raphaelite making, a techne defined by fluidity and hybridity. In keeping with this revisionary project, the editors position Pre-Raphaelite poetics in relation to politics, sexualities, genre, form, and inter-medial relations, indicating in the process its links to Modernism.” (Linda K. Hughes, Addie Levy Professor of Literature, Texas Christian University, USA)

“This rich and wide-ranging book offers a valuable and original contribution to the field of Pre-Raphaelite studies and will appeal to scholars of Pre-Raphaelitism and nineteenth-century literature. Defining Pre-Raphaelite Poetics focuses on Pre-Raphaelite poetic form in a variety of manifestations, taking in themes of gender, politics, and aesthetics, offering fresh insights into Pre-Raphaelite poetry against a broader backdrop of literary making and production.” (Amelia Yeates, Senior Lecturer in Art History, Liverpool Hope University, UK)

This specially commissioned edited collection seeks to define Pre-Raphaelite poetics. The Pre-Raphaelites were a group of nineteenth-century poets, artists, and critics who sought to reform art—broadly construed—by rejecting academic and mechanistic approaches. They reach back to the Romantic poets, particularly William Blake and John Keats, and their influence can be felt on Aesthetes and Decadents, such as Oscar Wilde, Aubrey Beardsley, Ernest Dowson, and William Butler Yeats. Scholarship has established the characteristic elements of Pre-Raphaelite visual and material arts, but we have not codified the methods, forms, and commonalities that constitute literary Pre-Raphaelitism. Pre-Raphaelite poetry has not yet shaken off its reputation as a “fleshly,” self-indulgent school popularizing the notion of “art for art’s sake.” This reputation unfairly limits Pre-Raphaelite studies, marginalizing an influential poetic movement. By locating literary Pre-Raphaelitism as a central poetic moment in the 1850s-1900s, our collection provides a critical overview of the scope and diversity of the Pre-Raphaelites, who were deeply invested in reshaping the nineteenth-century literary and artistic marketplace. Ultimately, this edited collection argues that the plurality of Pre-Raphaelite poetics is its consummate defining quality.

The bulk of our contributors developed their respective chapters based on our call for work, which resulted in chapters tailored for this collection. Contributors aim to respond to the following questions: What formal and stylistic characteristics are uniquely identifiable in Pre-Raphaelite poetry? How did Pre-Raphaelite networks—or Dinah Roe’s consideration of the “dining club atmosphere”—inflect the literary movement and the works produced? And, in what ways can literary Pre-Raphaelitism be seen as a response to, or engagement with, social or political life? To answer these questions,Defining Pre-Raphaelite Poeticstakes a formalist approach, which our contributors interpret capaciously, following Stephen Arata and Herbert Tucker’s appreciation of formal openness.[1]Extending Caroline Levine’s concept of formal “affordances”, many of our contributors understand form as an organizing principle, connecting the literary work to social and political life.[2]

Our authors position Pre-Raphaelite poetics broadly in the sense of poiesis, or acts of making. All of the essays consider poetry as interactive with other arts: from music and visual arts, to the making of the Pre-Raphaelites as a society themselves. This collection offers a broader range of Pre-Raphaelite literary scholarship than is currently available in any one volume, provoking innovative discussions into the poetic form, gender dynamics, political engagement, and networked communities of Pre-Raphaelitism. In short, Defining Pre-Raphaelite Poeticsaims to identify and explore the Pre-Raphaelites’ diverse forms of making: social, aesthetic, gendered, and sacred. Each chapter examines how Pre-Raphaelitism takes up and explores modes of making and re-making identity, relationality, moral transformations, and even, time and space.

[1]See the latest double-volume of Victorian Literature and Culture(46.3/4), which provides keywords for the Victorian field.

“Marriage of Her Royal Highness, the Princess Royal, and her Bridesmaids”

Quantified Lives: My monograph project, Quantified Lives: Nineteenth-Century British Poetry and the Mathematics of Social Totality, identifies the formal and thematic ways that nineteenth-century British poetry is concerned with counting as social control. The present fascination with quantification among critics such as Audrey Jaffe, Alex Woloch, Emily Steinlight, and Jesse Rosenthal has raised questions about norms, the individual within the mass, and the narratological implications of numbers. My project builds on such work by investigating the relations between nineteenth-century British poetry, mathematics, and the marital discourse.  For instance, the Victorian era witnessed a debate about the “perfect unity” of marriage, a discourse emphasizing the social calculus of “two become one.” In a society with an acknowledged obsession with such social math, how was one to start counting if the difference between one and two remained abstract? Moreover, how does one develop an understanding of ones and twos, of counting and of sequences, in the absence of formal training beyond basic arithmetic? And how might a poet do so? Quantified Lives develops an account of social numeracy in women’s poetry. Women poets, I claim, were developing numeracy through their poetry, numerating in their poetry, and responding to the ways that women were enumerated in nineteenth-century society. I argue that the most prominent women poets of the era, such as Elizabeth Barrett Browning, Christina Rossetti, Augusta Webster, and Michael Field (a.k.a., Edith Cooper and Katherine Bradley), were concerned with the problem of pushing people together too closely, and they questioned idealized forms of wholeness available to them, such as marriage. Poetry involves its own kinds of quantification—metrical and rhyming patterns—and the women poets in my study used such “numbers” and “measures” to theorize social counting as political and social control. Highlighting the relationships between poetry and mathematics, this book contributes to current efforts across disciplines to theorize and historicize the emergence of quantifying methods, reorienting our attention to nineteenth-century poetry as a critical source of social counting and statistical commentary.